Calgary Family Goes The Distance To Live The Olympic Dream 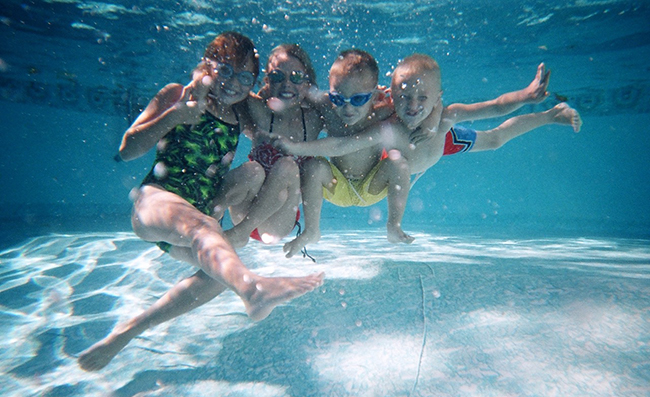 The routine was well-established. Before dawn, precious (and bleary-eyed) cargo would be loaded into the 2008 Dodge Caravan.

Taking control of the trusty orange van, always stocked with snacks, was Mom or Dad.

And the daily destination from the family’s home in Deer Run?

The varying schedules of the kids — daughters Taryn and Halle, twin boys Cole and Kian — meant it could be either one or two or sometimes even three of the following swimming pools.

“This big loop through the southeast corner of Calgary,” said Jasen Pratt, with a laugh. “It was the decision that the family had made — ‘This is what we’re going to do and participate in.’ Yeah, it’s complicated and sometimes it can be hectic and stressful. But it’s just the way it is.”

Car pooling, at times, made life simpler. And, eventually, the children got old enough to drive themselves. But for the bulk of this wet-eared journey from eager to elite — Halle excels at artistic swimming; the rest race — Jasen and his wife Jacqueline were at the wheel.

Week days and weekends. Drop off, pick up, repeat.

For all involved, the pace was relentless — even when they happened to be headed for the same venue. It’s worth pointing out that Halle was required to be on the pool’s deck by 5:15 a.m., the others by 5:45. Let that sink in.

Then, of course, all four would have after-school sessions — somewhere in the city.

“It’s a rat race, right?” Jacqueline said. “It was non-stop. I remember sometimes stopping at a red light and I would say, ‘Boys, tell me when the light turns green. I just want to close my eyes for a second.’ It was very hectic.

“We had those days where it just seemed like, ‘Oh, this is a lot.’ We know families go through that. We listen to them all the time. And we’ve been there.

“But if your kids are loving what they do, it’s completely worth it.”

Jasen chuckles, then shrugs. Because chauffeuring is integral to the arrangement, which is what he and Jacqueline, as parents, signed up for all those years ago.

“We are true believers in the power of sport and all the positives that can come from it,” he said. “As former athletes ourselves, we just wanted it to take its natural course of action.

“And the best way for the natural course of action to happen? Step back, let your kids do their thing, make sure they get there, make sure they’re fed and happy.”

The Pratts’ youngsters have now reached adulthood — Taryn, 23; Halle, 21; Cole and Kian, 18 — but, even these days, they never roam far from water. As a matter of fact, two of them have pushed themselves to the pinnacle — the Olympic Games.

Members of Team Canada, Cole and Halle are in Tokyo.

An accomplishment certainly worth celebrating.

Even if for Jasen and Jacqueline, Japan was off-limits because of spectator restrictions. All those mornings, all those miles, and now they’re forced to stay away.

“Man, I wish we were there, but we’re not. The kids are, though, right? That’s the main thing,” said Jacqueline. “Both of them had a lot of success along the way, from a pretty young age. We always knew that was their goal, not that we overly discussed it at home. But we always knew that in their brains this was what they were striving for. You see the work they put in and you just go, ‘You deserve to be there.'”

When Halle and Cole both participated in the 2019 World Aquatics Championships in Gwangju, South Korea, the family discussed making the trip. Instead, they decided that they’d all go to Tokyo.

Then came the pandemic fallout.

“They know we’re there with them in spirit,” said Jasen. “But that was heart-breaking … a huge disappointment. But, at the end of the day, at least the event is going on, and the event is about the athletes.”

To witness Cole’s debut at the Olympics — men’s 100-metre backstroke heat — Mom and Dad had risen in the wee hours, cradled cups of coffee, and, while still in pajamas, sat in their own living room and cheered.

“It’s amazing. It’s an amazing feeling to think, ‘There they are,'” said Jacqueline. “I mean, it feels awesome. It’s incredible.”

As it turned out, Cole, a 2020 recipient of the Art Smith Endowment Grant from the Calgary Booster Club, and Halle, herself a five-time endowment winner, were scheduled to compete at opposite ends of the Olympic fortnight — him within days of the opening ceremony, her within days of the closing ceremony.

Still, there had been enough overlap for some together-time in Tokyo.

Which left Mom with one sincere hope.

“That they can get a picture in front of the Olympic rings — that would be something special,” said Jacqueline, who, later, shared photographic evidence of the two standing beside the Team Canada moose in the athletes’ village. “We’re happy they have each other since we’re not there.”

Growing up in Fort McMurray, Jacqueline and Jasen raced for the Mantas Swim Club, then for the University of Alberta.

Jasen spent five years with the national team, medalling in the 400-metre individual medley at the 1991 Pan-Am Games in Cuba. Then, at the trials for the 1992 Olympics, he missed qualifying for Barcelona by a whisker.

It was coaching that allowed them to stay involved in their favourite sport.

After working at the Regina Optimist Dolphins Swim Club for years, Jasen and Jacqueline relocated their young family to Calgary in 2007. These days he manages the Cascade Swim Club, while she coaches there.

Given the couple’s high-level history in the pool, you might expect a whip-cracking approach to their own children’s participation. You’d be wrong.

“Our only instruction to them was, ‘Work your hardest, listen to what your coach says, and you’ll probably be successful.’ It was simple, but it kind of stuck with them.”

Actually, they had been demanding about one thing — attendance. Show up when you’re supposed to. Sure, there had been exceptions — for school events or other activities — but no blow-offs were permitted.

So, daily, the kids set their own alarms, packed their own gear, clambered aboard the van, and, with few complaints, embraced the routine.

“That was not something from us, barking at them — we never had to do that,” said Jacqueline. “There’s this momentum in the house, where this is just what we do. We never ever had to say, ‘Come on, let’s go.'”

Despite its dominating presence in all their lives, swimming seldom turned into a topic of conversation at home. There’s plenty else to gab about at the dinner table.

Speaking of which, there was a non-negotiable family rule. If everyone’s in town? Supper — together.

“Some nights that meant eating late at night … waiting for the last one to roll in,” said Jacqueline. “I just feel like it kept us connected. I’m so grateful we did it. When your kids get to a certain level, coaches spend more time with them than you do. For us, having dinner together was so important — ‘Look, we’re all here.'”

Meal time also served a practical function — significant intake for four fuel-depleted youngsters. Go-to dishes include spaghetti and meatballs, butter chicken and rice, but each had their own favourite. Menu items became a hot-button topic.

“Probably the most commonly asked question from any of the kids at any moment — ‘What’s for dinner?'” said Jasen. “As soon as they get in the car, somebody’s calling home to find out what’s for dinner.”

The parents paint a picture of support amongst the siblings, free of rivalry and jealousy, despite their high-achieving tendencies.

“There’s a real closeness there,” said Jacqueline. “If one has a little bit of success, then the next one does. They’re just rooting for each other, kind of like a team.”

There is one exception. Easter’s egg hunt, something which, in all ferocity, continues to this day. Combatants pair off — Halle with Cole, Taryn with Kian — and then? “Stand back,” said Jasen, with a grin. “Just stand back.” Jacqueline admits that things can get “a little vicious.”

And because the kids demand full participation for the annual event, proceedings are sometimes delayed, one time till June.

“If there are friends around, they get roped into the competition,” said Jasen, “whether they want to be a part of it or not.”

Added Jacqueline: “Sheer madness. They run through the house and rip it apart.”

With whistle in hand or kids in the van, as coaches and parents, the Pratts have always preached the long game.

At the club, they sometimes witness the other side of that — grownups itching to see progress.

“You know what? Each child is going to do it at their pace,” said Jacqueline. “We just need to be patient and let them figure it out, right?”

She hated competing, literally cried in the starting blocks. It was curious. After all, her parents raced, her big sister was racing, and so were the boys.

But her? No way. Someone suggested synchronized swimming. So, when the family arrived in Calgary, Halle joined the Aquabelles. “And let me tell you, it was the best thing — she immediately loved it,” said Jacqueline. “A perfect fit for her. It’s funny how things fall into place like that.”

And while it may be a pool activity, that particular sport had been foreign to the family.

Together, they learned about synchronized swimming and its punishing demands. A quick study, Halle, by 12 years of age, had cracked the national junior team.

“It’s something that’s just beautiful to watch,” said Jacqueline. “We’ve grown with her.”

What the Pratts do know well is swimming — and swimming fast.

And it hadn’t been long before Cole and Kian, without mercy, began to kick the living heck out of Dad’s personal bests.

“Oh my god, when they were 14 years old,” Jasen said, chuckling. “It’s pretty neat, but I would never even talk to them about that now because it would be embarrassing how much faster they are than I was 30 years ago.”

Taryn, too, carved out her own chapter in family lore. The eldest, according to her parents, deserves credit for establishing the athletic tone in the household. The rest simply followed. “Honestly, competitive and on-task, she’s a great role model,” said Jacqueline. “She set the stage for being on time, for working hard. So that was the expectation.”

Everyone gets equal billing on the right forearms of Jacqueline and Jason, who, on their anniversary two years ago, got matching tattoos — their kids’ names, linked cursively.

The next round of inkwork belongs to Halle and Cole, who, one day soon, will make a trip to the tattoo parlour to have the Olympic rings marked onto them — a permanent reminder that the Pratts sent two family members to the 2020 Olympic Games in Tokyo.

“Well, it is amazing,” said Jacqueline. “I guess for us it’s just been year after year, plunking along, getting to practice. It was a lifestyle.”