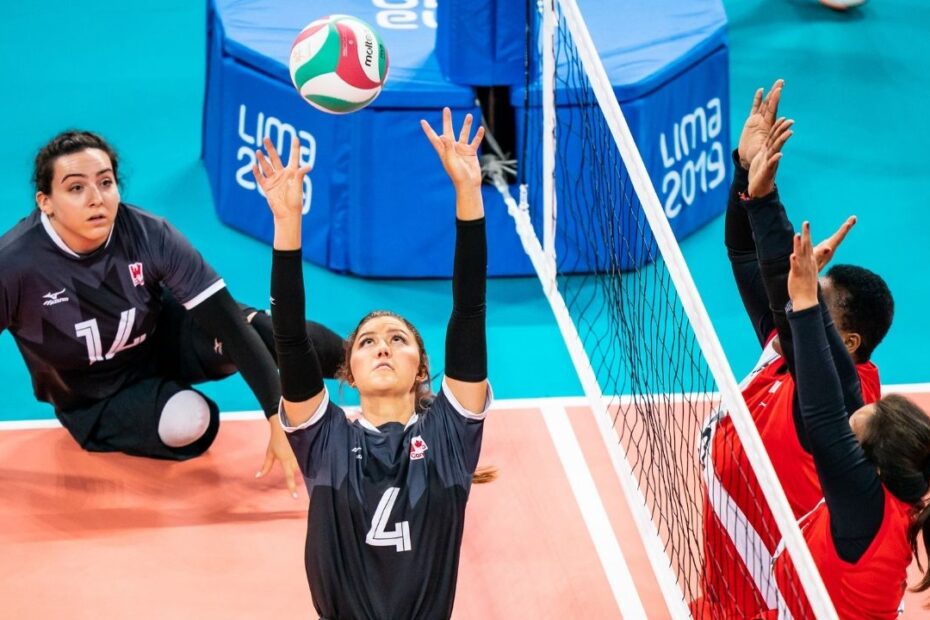 Within minutes of the boating accident, while bleeding profusely, she is repeatedly reassuring the driver that nobody is to blame for the mishap.

Within days, she is asking doctors when she can get fitted for a prosthetic, when she can resume her athletic pursuits.

Within a week, she is welcoming loved ones to her hospital room and, with trademark charm, putting uncomfortable guests at ease.

Within two weeks, she is posting onto Instagram a photo of herself from before the amputation, cheekily captioning it: “(Throwback) to 2 legs,” shocking some of her followers.

Within a month, she is streaming action from the ParaPan-Am Games, and, with an eye to the future, cheering on the Canadians.

Within two months, she is trying her hand at sitting volleyball.

Within three months, she is showing enough promise that the national team brings her aboard.

Within 13 months, she is flying to Rio de Janeiro, Brazil, to compete at the 2016 Paralympics.

This is Jennifer Oakes.

A Calgarian who nearly died on the shores of Lake Newell, Alta., on July 10, 2015, at the age of 17. Who lost her right leg below the knee to an unforgiving propeller.

Who has become a beacon of inspiration, displaying a well of inner-strength that surprises even those who know her best.

“Sometimes I look back and go, ‘Wow. How did she do that?'” her mom Kathy said. “I’d think, ‘OK, maybe she’s going to crash here. It’s going to hit her some day.’ But she always, somehow, managed to find a way to look at the positives, to look ahead to the things she could do, not the things that she couldn’t do.

“She really took it all in stride. She didn’t have many oh-woe-is-me kind of days. Seeing how she was taking it, how could anybody be sad or anything other than just proud, right?”

As is their custom, Para-athletes had rallied, ringing Oakes shortly after the accident to offer support and resources and, of course, hope.

Their calls found a youngster in the hospital, eager to hear more, eager to get going.

“Jenn has never let her accident slow her down,” said Shacarra Orr, a former national-team member and now a close friend. “From the moment it happened, she was ready to go. She was very receptive, very keen.

“That’s Jenn’s attitude with everything in life. There’s never any hesitation. It’s very much, ‘OK, what can we do next? Where are we going?'”

Where? The answer in this case is straightforward — Tokyo for the 2020 Paralympic Games. Next week, Oakes leads the Canadians into Makuhari Messe Event Hall for the start of the sitting-volleyball tournament. They open against Brazil.

“I’ve gotten to train with these girls for six years, so I’m pretty excited to see the growth between Rio and Tokyo,” said Oakes, 23. “That’s something I can’t wait to see unfold.”

On the 11-player roster are eight athletes who competed in 2016. Oakes knows what the three newcomers need to hear.

“In that kind of situation, it’s really easy to get overwhelmed or scared,” said Oakes, who works for AdFarm, an agricultural marketing agency. “So stay really confident and believe in yourself and the team.”

According to Orr, few people are better equipped to have that calming influence than Oakes, no matter how things are going on the court.

“Jenn’s very naturally athletic, but her personality is just a joy to be around,” she said. “She really is a sunshine in this. In all of the hardship, in all of the games and the stress, she’s always laughing, always having fun.

“Emotionally, she’s a great fit for the team. She’s a leader, someone the teammates turn to and look up to.”

Growing up in MacEwen, a neighbourhood in Calgary’s northwest, Jenn Oakes had been a volleyball standout at William Aberhart High School, helping the Orange capture the city championship.

Then came the fateful summer of 2015, the supposedly sunny months wedged between Grade 11 and 12.

Toppling off the front of a moving boat, Oakes was slashed by the propeller. During the helicopter trip to Foothills Medical Centre, attendants used every ounce of blood on board. “And once I got to the hospital, I needed more,” said Oakes, who has since done speaking engagements on behalf of STARS air ambulance and Canadian Blood Services. “They saved my life.”

Recovering, the teenager quickly adjusted to her new reality, which included some good news — surgeons had managed to save her knee. Soon rooted was the notion of resuming sports.

“I’ve always been an athlete so that was the first thing I turned to — what am I going to be able to do?” said Oakes. “I was researching all these new sports. That was kind of exciting for me — something to look forward to trying. To be involved in the Para-sport community was really huge in my recovery. I think it kept me really distracted.”

Embraced at that time, too, was a line from a book that one of her coaches had given her: “The mind is its own place, and in itself can make a heaven of hell, a hell of heaven,” John Milton wrote in his poem Paradise Lost.

“That quote speaks for itself,” said Oakes, “but it really helped with a good mindset.”

Nobody ever questions hers. Even if that Instagram post — “Tb to 2 legs” — did catch her followers off guard. When the topic is raised, Oakes laughs.

“Looking back now, I can see why everyone was up in arms about it,” she said. “I think my sisters (Tamara and Sarah) were like, ‘Do we laugh at this? What’s going on?’ I thought it was kind of funny.

That big personality also included a fierce desire to get back on the hardwood. She had not been shy about her comeback declarations.

“At the time, I was thinking, ‘Oh, Jenn. My god, I don’t think you’re ever going to play volleyball again,'” said Mom. “I didn’t say that out loud … but she certainly didn’t think that this was going to stop her.”

“That was really exciting — I got to be an athlete again,” said Oakes. “Immediately I wanted to be really good at it. I was really committed right at the first practice.”

Of course, there had been adjustments. Lower net. Smaller court. Rules that require competitors to keep a part of their torso on the floor at all times. Catching on, she became part of Canada’s travelling team, which booked its trip to Rio. The Paralympic Games were something else, according to Oakes, with the heightened stakes and packed houses.

“I would go back to serve and you could feel the ground shaking,” she said. “You just have to keep yourself in check, calm yourself down, between every play.”

Afterward, with UBC-Okanagan honouring its scholarship offer, she spent two years in Kelowna, wearing a prosthetic and playing standing volleyball.

“She was pretty keen,” said Kathy. “She had that never-give-up attitude. She was somehow still able to play at a high level.”

Team Canada qualified for the Tokyo Paralympics in February 2020 during the World ParaVolleyball tourney. (The hosts won gold in Halifax and Oakes was named top server.)

The Games had been only months away.

Then the world, abruptly, changed. And the Paralympics got shoved a full year into the future.

“(That qualifier) feels like a really long time ago,” said Oakes, taking a break during her team’s recent week-long camp in Edmonton. “We were just watching video and I was like, ‘Holy smokes. I barely remember any of this.'”

The 12-month shift forward meant everyone needed to reboot their preparation.

With lockdowns in effect, how the heck were athletes going to stay sharp? “We all sent in funny videos of what we were using for training facilities,” said Oakes, adding that one teammate found space in a barn to put up a net.

She laughs. “We had a couple team workouts through Zoom, too, which was pretty fun.”

Anything to maintain fitness during unprecedented times.

“The whole team, we were all, ‘Well, we can’t let it go now. We have to keep pushing through this,'” said Oakes. “We contacted our teammates a lot. It helped to stay connected and still have that goal in mind, knowing that we were all putting in the work, even if it was unconventional.”

According to Kathy, her daughter also cooked up her own standing sport — called, naturally, Jenn-ball.

Similar to Spikeball, it’s an outdoor two-on-two game, played with an actual volleyball and a circular piece of wood anchored in the middle. Matches, according to Kathy, got pretty heated.

Meaning Oakes is ready for Toyko.

Orr, though, won’t be suiting up. She retired following the 2016 Paralympics, but not without misgivings. Primarily because she was worried that her relationship with Oakes, with volleyball and travelling as its thread, might be disrupted.

“But I would say that we’ve gotten even closer,” said Orr. “She’s such a light to the team, but also to my life as a friend.”

She goes on to talk about the positive influence Oakes has had on her, especially in the past year.

She gets emotional discussing the surprise birthday party in her honour at the 2016 Paralympics — which had been Oakes’ doing. And Orr chuckles recalling the headlocks her chum would playfully administer.

But what stands out to Oakes — and everyone else — is how Oakes overcame adversity six years ago. It’s no wonder that she’s earned awards with words such as “grit” and “guts” in their descriptions.

“I’m super proud of her,” said Orr. “I don’t think she realizes how astounding her story is.”

Maybe one day somebody will convince Oakes to pick up a pen.

“The kid could write a book on what to do,” said Kathy, “because, for some reason, she seemed to know how to take on the challenge. Upbeat, but also very resilient — some may say stubborn. She would never give up. She was that kind of kid. She just took it on without complaining.

“Every day, all the time, she continues to amaze me.”