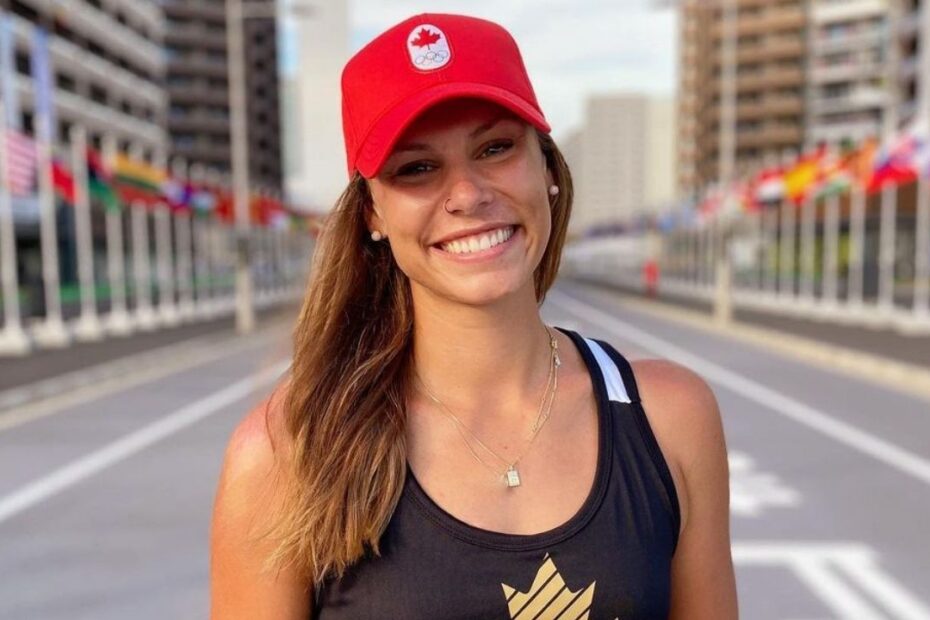 Moving her cup of coffee out of the way, she reaches back into her bag and quickly finds what she’s looking for.

On the small table in front of her, she places the plain-looking container, circular and a couple of inches thick. It might house a stack of CDs, a bunch of DVDs. Headphones, maybe.

But, really, there is no mistaking the contents.

“I bring it everywhere. I really enjoy sharing it,” said Kasia Gruchalla-Wesierski. “Do you want to see it?”

She twists off the case’s lid. Nestled inside is the Olympic gold medal won by the Calgary rower. Without hesitation, she hands it over.

It’s chunky, kind of heavy, a bit dented. Laughing, Gruchalla-Wesierski explains that she’s already dropped it. But don’t dare to confuse that oopsie with anything resembling a lack of respect.

Because her pursuit of this shiny symbol of excellence has been singleminded. Incredible is the number of obstacles navigated — emergency wards and exhaustion, wrecked knees and broken bones, penny-pinching and second-guessing.

All of which paid off on a steamy morning in Tokyo.

Over the course of six minutes, her investment had been distilled into the object now sitting in the middle of a table in the corner of a Marda Loop coffee shop.

“It’s weird. This is what you work for. This is the pinnacle of sport. Now that it’s happened, it’s just bizarre that this medal is right in front of me,” said Gruchalla-Wesierski, a member of the Canadian women’s eight boat. “It wouldn’t mean as much if it weren’t for the journey and everything we’ve gone through as a crew, as a team. So many stories of blood, sweat, and tears, from so many different angles, from so many different teammates, really contributed to this medal.

“I think that’s why it’s so precious to me.”

Precious enough to provide an unexpected nudge toward the 2024 Olympics in Paris — a three-year commitment she wouldn’t have considered a month ago. Now, as a defending champ, there’s a tug.

“It’s definitely not off the table,” said Gruchalla-Wesierski, 30. “I just need some time to enjoy everything and see what I want to do.”

Since her heroic return to Calgary, she’s busily made the rounds. Visiting her parents, Tad and Cristina, and checking in with friends. When she finishes her latte, she’s rushing off to see track cyclist Georgia Simmerling. That is, if she’s not delayed by a selfie request or two.

Newly famous, Gruchalla-Wesierski is still getting used to being recognized on the street.

“I’m a pretty down-to-earth person, so it’s surprising when it happens,” she said. “I kind of forget — ‘What? What is happening? Why do people want to talk to me?’ It takes a second to wrap my head around it. People have been really polite, really kind.

“And the medal is meant to be shared, in my opinion. It is bigger than me. It means something to my community — that’s really what it’s about.”

Centralized in Victoria, national-team rowers will not congregate till the new year.

Typically, they get only a three-week break — in September — so Gruchalla-Wesierski will use the extra time to re-charge and presumably update her resumé with a bold-faced entry, simple but powerful.

Of her belongings, there is nothing more valuable than the black case’s cargo.

“I think this’ll be a new family heirloom that’s kind of special.”

Born in Montreal, Gruchalla-Wesierski and her family moved to Calgary when she was five.

Three years later, they relocated again, this time to Russia. There, Gruchalla-Wesierski attended a French school and played soccer — as the only girl on the team. “I remember walking in and all these guys stared at me, this little eight-year-old. I was just, ‘Is there seriously no other girl here?'”

Unfazed, she dug in and enjoyed the experience, which served an ideal outlet for her over-sized competitive spirit.

“It was awesome,” she said, laughing, “and I got invited to all the birthday parties. It’s a running joke in my family … I’ve always been one of the boys.”

Returning to Calgary two years later, the kid embraced ski-racing. The target was clear — “I wanted to go to the Olympics” — although she wasn’t a natural on the slopes.

At 17 — and desperate to crack the provincial squad — she veered away from caution. Taking a “gutsy” line in a race, she hit a rut, wiped out, broke her tibia. “And that was the end of my ski-racing career.”

Besides, she said, it felt like it was time to get on with her life. Graduating from Bishop Carroll High School, she enrolled at the University of Calgary, eventually transferring to UBC. Admittedly, her mind was never entirely on her studies.

“I had this gut feeling that I still wanted to be an elite athlete,” said Gruchalla-Wesierski. “I think people thought I was crazy. But I really missed sport, I missed being an athlete — I still had that fire.”

All of which she ended up funnelling into women’s soccer. Even if, at 21, she wrenched her anterior cruciate ligament, an injury that required surgical repair. “I’m not a stranger to injury, that’s for sure.”

Stubbornly she remained convinced that, given her drive, she could excel — in something.

Strong-legged and powerful, she mulled a future in bobsleigh. Her close friend Helena Hlas — someone with whom she’d ski-raced and gone to school — suggested rowing. Hlas herself had made the transition, earning a spot on the Czech national team.

Timing, however, had not been perfect. Following an extended junket through southeast Asia, she trudged into a talent-identification session in Calgary in February 2014. “I was so out of shape.” Which her results revealed.

And, at five-foot-10, Gruchalla-Wesierski was deemed too short.

She persisted, throwing herself into dryland training. Fitness — and hope — returned in leaps.

“I don’t know if you want to call it intuition,” she said, “but I just knew that was going to be the thing that was going get me to where I wanted to go.”

It’s worth noting that she still hadn’t spent one second on the water. But for someone like Gruchalla-Wesierski, who had just turned 23, being inexperienced is somehow invigorating.

There had been adjustments. Boats are “tippy.” Blisters are frequent. No matter. “You check your ego at the door, ‘Yup, I’m probably going to be bad at this — and that’s OK.'”

To keep alive the dream as an unfunded walk-on, she toiled as a landscaper and put in hours for Lululemon. From the Calgary Booster Club, she received the Art Smith Endowment Grant.

Good news? By January 2018, she was on the national team.

Bad news? Rowing full-time was more difficult than she’d imagined. Uncharacteristic doubt had her making a deal with herself — she would tough it out for a few more months, then re-evaluate.

“And I made it,” said Gruchalla-Wesierski. “As that summer came on, I was like, ‘Wow. I am really enjoying this.’ I love pushing myself. And I made more connections to the girls on the team, so then you kind of build your support system.”

Her debut for Team Canada arrived at a World Cup stop in Lucerne, Switzerland.

And that experience? “Unreal.”

From there, it would be a straight two-year line to Tokyo, right?

Except for the COVID pandemic, which shouldered the Olympics 12 months into the future.

Except for her horrific bike crash, which happened a heart-breaking 40 days before the opening ceremonies.

“I don’t know what happened,” Gruchalla-Wesierski said of the training-session spill near Campbell River, B.C. “A freak accident. I just hit the pavement really hard.”

At the hospital she was informed that, among other things, her collarbone had been fractured. That kind of damage can put an athlete on the shelf for months, not weeks.

“I obviously had a moment of complete breakdown, ‘I can’t believe this is happening,'” said Gruchalla-Wesierski. “But I refused to believe that this was the end of my story. I told my emergency doc and nurse, who are both amazing, ‘I know you’ll think I’m crazy, but I feel like there’s a way for me to get to the start line.'”

One specialist told her to forget it. A story in the Victoria Times Colonist outlined the situation, leaning into the likelihood of Gruchalla-Wesierski missing the Olympics.”I’d always visualized my first newspaper article being about me with a medal maybe.”

Four days after her collarbone was surgically bolstered by 10 screws and a plate, she was pain-free, at least physically. “It was the most stressful month of my life.”

Reaching out had been Canadian legend Silken Laumann, who suffered a gruesome calf injury a couple of months prior to the 1992 Olympics, yet still medalled in single sculls.

“It was talking to somebody who got it, who really understood it,” said Gruchalla-Wesierski. “She was so supportive.”

Training madly, she stayed in Canada 10 days longer than her teammates. Then, shortly after landing in Tokyo, she was put on the spot, needing to beat reserve rower (and friend) Rebecca Zimmerman for her seat on the boat. “Not really a fun place to be.”

Prevailing was Gruchalla-Wesierski (who is emphatic that Zimmerman remains “a huge part of our story”). Lineup settled, it was time for the Canadians to race. Having not appeared on the international scene for nearly two years, they were dark horses. At least to everybody else. “No other country knew how fast we were.”

Earlier in the summer, the team had gathered to watch a video of the men’s eight final from the 2008 Olympics in Beijing. The Canadian entry, which never trailed, claimed gold.

“We were all in tears afterward,” said Gruchalla-Wesierski. “It just gave you goosebumps. It was the coolest race to watch. We all said, ‘Wow, that would be a way to win an eights race — going out first and being in control.’ And that’s what we did.”

Which the world witnessed July 30 on the Sea Forest Waterway in Tokyo Bay.

“I don’t think I even felt the pain because I was so overwhelmed,” said Gruchalla-Wesierski. “I was crying and laughing. I think I said, ‘What!’ about 25 times on the boat, just because I couldn’t believe it.

As occupants of the podium’s top, they had the honour of hearing the national anthem. And their enthusiasm, evident even through masks, trumped their lack of singing ability.

“Pure joy — we just screamed it at the top of our lungs,” said Gruchalla-Wesierski. “It sounded awful. Two girls are amazing singers and I was just hoping they’d carry us through. The rest of us are terrible.”

There was one more emotionally charged moment.

“I didn’t know this, but when you win, you get a certificate,” said Gruchalla-Wesierski. “It looks like a diploma. It says my name and Olympic gold medallist. I got it at the airport right before I left. That hit me pretty hard, almost harder than the medal, because that title is something that’s extremely surreal.

“We were always gunning for a medal and we knew we were fast enough to win if we had our perfect race — and we had it. But the title of Olympic champion is something I need to sit with and get used to.”