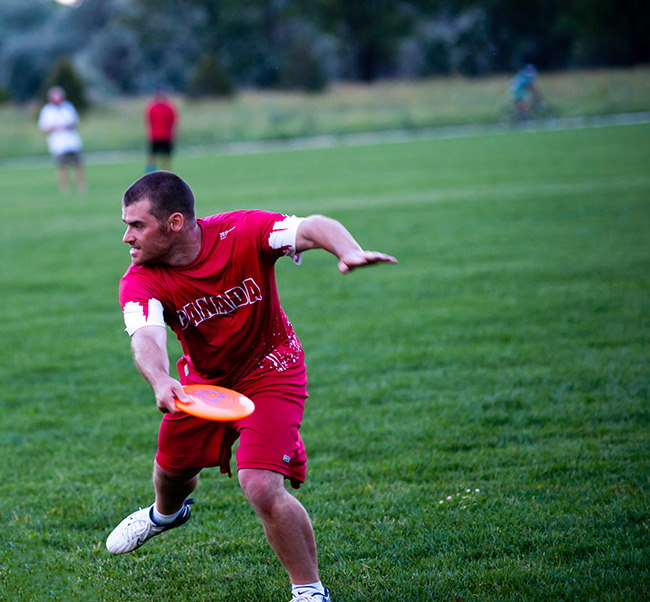 Frisbee master Rob McLeod, with a little help from a furry friend, will attempt a 110-yard feat at the Calgary Stampeders’ game Saturday, October 23 at McMahon Stadium.

No stranger to far-flung accomplishments, McLeod is the winner of 13 World Championships. He also owns the Canadian distance record.

“The Calgary Stampeders are excited to have six-time Guinness World Record holder “Frisbee Rob” McLeod performing at the halftime show with his canine teammate Sailor,” said Austin Shaw, Game Presentation and Events Manager. “Frisbee Rob is one of the most experienced, talented, and well-recognized frisbee performers in the world. We know that our fans will be absolutely delighted when they see this duo in action!”

McLeod, in front of Canadian Football League fans at the Stamps’ home field, plans to launch a disc from one end zone and have Sailor, a border collie-whippet mix, run from his side and catch it in the other end zone.

“Having the opportunity to perform at a Stampeders game is a dream come true,” said McLeod. “My dad was an all-Canadian football player in university and I grew up loving the sport, especially seeing how far I could throw the football with my buddy in high school. When I got into frisbee, I continued pushing the limits of how far I could throw, which led to me breaking the Guinness World Record for Longest Flying Disc Throw Caught by a Dog in 2012 with Davy Whippet”.

“To become the first person to ever throw end zone to end zone to a dog at a live game would be incredible and extra special in front of the hometown crowd at McMahon!”

Permitted by the Stamps to donate $5 from each ticket he sells to charity, McLeod has decided to funnel the proceeds to the Bob Freeze Sport Grant.

“I’ve been teaching and coaching youth sports since I was in Grade 5, so when the opportunity was presented to donate to a charity of my choice, I reached out to the Calgary Booster Club to see what would bring value to youth sports in the city,” said McLeod. “The Bob Freeze Sport Grant was the best match, which goes to support local athletes up to the age of 16 years old. Many athletes need support, whether it be for coaching, travelling, or equipment, so I’m excited to help provide more resources to these up and coming athletes.”

Named one of the Calgary Booster Club’s Honoured Athletic Leaders in 2020, McLeod is certainly a contributor to the community. Over the years — and across the country — he has made appearances at 400 schools, reaching 135,000 students.

Kickoff is 7:45 p.m. for the game, which features the Stamps’ annual PinkPower initiative in support of the Canadian Cancer Society. The Stamps will be playing the Saskatchewan Roughriders for the 3rd time this season, with the Stamps leading the head-to-head series 2-0.