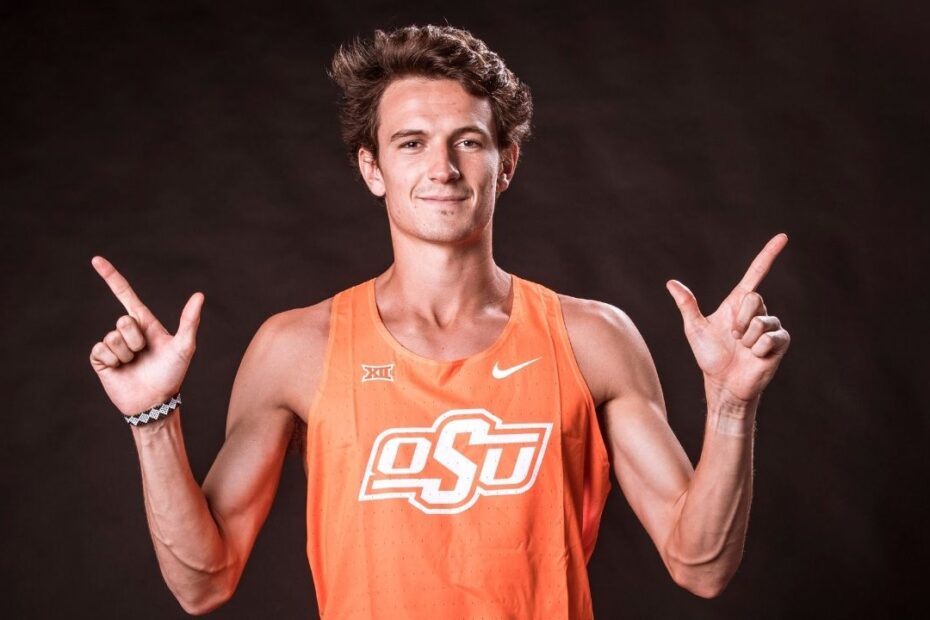 In the fall of 2016, Ryan Smeeton gathered up his things. Then, from his home in Calgary, he travelled to the campus of Oklahoma State University.

Amongst his belongings, he was packing high hopes and an unblemished running resume.

So, naturally, the teenager had been eager to test himself in the high-stakes world of U.S. college athletics. To break a tape or two. To make a name for himself. To take the next logical step in a blossoming career.

“I kind of thought I’d show up here and be pretty good,” Smeeton said the other day.

However, as soon as the freshman began to pace with the rest of the Cowboys’ track regulars, he discovered a hard truth — he had work to do, even to be considered average.

Asked about that reality check — if it had been disheartening, as a newcomer, to experience something like that — Smeeton says that’s not how he processed it. Not at all.

“Motivating more than anything — I appreciated the challenge of it,” said Smeeton. “It added a lot of discipline and excitement to my everyday life, focusing on doing everything that you can to perform the best in competition. Everything from cleaning up your diet, getting as much rest as you can, really training hard.

“The level of competition is crazy. Definitely a shock to your system. You realize that you really have to do everything right to be the best. Once I wrapped my head around that, I got to work.”

This story is relayed to Terry Crook, who, while with the Calgary Warriors, had served as Smeeton’s first club coach. Absorbing the details — how the young college runner had simply rolled up his sleeves in the face of apparent talent deficit — he cackles.

Because it rings a few bells for Crook.

Smeeton, barely out of Woodbine Elementary School, had followed his big brother Eric to the Warriors. Typically Crook would herd the kids into two groups — little boys and girls on one side, older ones on the other.

Which made sense, especially in Smeeton’s case.

“He was a quiet, nice, little guy, you could tell right off the bat,” recalled Crook. “Unsure of himself and everything else that goes with it. We’ve all been there. He had that kind look, but very nervous.”

After a few months, the youngster approached Crook. Politely, he suggested that he would appreciate being allowed to join the bigger (and stronger and faster) kids.

Smeeton won that debate. The boy’s determination came to define him.

“He was driven, right?” said Crook. “He wanted to be a part of something. He wanted to see what he could do. He wanted to throw himself out there. You could see it at a young age with that little guy. He was ready to go, you know. He kept trying and trying.”

It’s a steely approach that has served him well — back in those days, then later at college.

Because Smeeton has indeed established himself.

One of the steadiest cross-country runners on the circuit, he finished 57th at the NCAA Division 1 showcase in Tallahassee, Fla., on Saturday.

And Smeeton is a top-flight presence in the 3,000-metre steeplechase, a grinder of a track event featuring hurdles and water obstacles. Placing second at the 2019 NCAA championships, third in 2021, he will be one of the favourites in June, his last kick at the U.S. college crown.

Beyond that? Quite possibly the Commonwealth Games this summer in England. And, of course, the 2024 Olympics are on his radar.

None of this comes as a surprise to Crook.

“He ain’t going to go down without trying,” said Crook, who nowadays coaches at the Calgary Spartans club. “He was always like that. He wants to be good. If it’s going to take hard work to do it, he’s going to do it.

“Distance runners are made, they’re not born. It’s about development, right? It’s about paths.”

Early days aside, OSU coaches knew they had landed a runner with promise.

How much promise? That would be determined.

First, though, he needed to adjust. To the practice demands, which had been cranked up. To the classroom, too.

Stillwater, Okla., is nearly 3,000 kilometres from Calgary — from his parents, John and Brenda. Like freshmen everywhere, the kid needed to get accustomed to the freedom of college life. No one’s waking you up in the morning. No one’s telling you to go to school. No one’s taking attendance.

“It’s just realizing that you still have to do certain things,” said Smeeton. “If you want to excel … you need to take care of your grades. You don’t want to be staying up before a big race because you decided to start an essay the night before it was due.”

Disciplined, he embraced the academic side.

Soon enough, his track specialty was flushed out.

One of the OSU coaches happened to have expertise in steeplechase. Smeeton mentioned one day that he’d done a couple in his high-school days, making it a venture worth exploring. He entered a race. “It went really well for me. Just never looked back.”

Without sacrifice, of course, nothing pans out. For elite runners, work invested is considerable.

For instance, preparations for the fall’s cross-country season look like this:

And don’t forget — that’s as classes and assignments are ongoing.

Commitment is considerable. And even if it’s non-negotiable, he is unfazed. “I’m electing to do all this. No one’s forcing me to do this.”

But who would bother if there aren’t tangible results? If the stopwatch isn’t providing positive reinforcement?

Smeeton’s remarkable roll in the spring of 2019 was exactly that kind of reward.

May 2 — Knocks another 13 (!) seconds from his personal best, posting an 8:27.90 at the Payton Jordan Invitational in California. It’s better than the world championship standard.

“That would be my first break-out moment,” said Smeeton. “Going into that competition people didn’t really know who I was. Following that, on the NCAA scene for sure, my name has always been in the conversation.

“You don’t typically see big jumps in performance like that. That’s part of the reason I surprised so many people … myself the most.”

Suddenly, his outlook needed an overhaul.

“When I came to Oklahoma State, I didn’t really have an honest plan,” said Smeeton. “Then I had performances that turned some of those dreams into more realistic things that I had legitimate shots of achieving.”

Second at the NCAA final and first-team All-American.

Now in his final season of college eligibility — mechanical-engineering degree pocketed, management minor in the works — Smeeton has an obvious goal.

The 2024 Olympic Games in Paris. “Absolutely, I would say that’s at the forefront of my mind,” said the 23-year-old.

And, for somebody with numbers like Smeeton’s, it’s certainly not a stretch. To qualify for the Summer Games, there is a “hard and fast time standard” — 8:22 for the steeplechase. Alternatively, he says, “maybe you run 8:24 three different times. You can be selected by that process, too.”

At the Canadian trials, a runner must place in top-three to earn a spot.

None of the above happened for Smeeton leading into 2020 Olympics, which isn’t to say he was oblivious to the proceedings in Tokyo.

“I was pretty glued to the TV,” he said. “We wake up pretty early to run here because (of the heat) … and we would be up at 5 o’clock to watch some of the events. It was like that every day for 10 days.”

Seeing his peers on that stage made it feel “definitely realistic” to get there one day.

“Not to take away from their great accomplishments and say, ‘If they can do it, I can do it — it’s easy,'” he said. “It definitely puts it in perspective that this is achievable. These guys got here by working hard and being dedicated and being committed and consistent.

“If I can do the same thing, I will have my best shot to be there with them at the next Olympic Games.”

A sentiment which, no doubt, makes his baby steps in the sport seem distant — even if they remain entirely memorable.

A cross-country-running dynamo at Woodbine Elementary School, Smeeton joined the club scene and needed to find his way. Sprinting is where he started.

“I was getting smoked. Like, laughably last in most of my races,” he said. “A 60-metre dash and there would be daylight between me and second last.”

Re-cast as a middle-distance runner, he tried an 800-metre event, which he won. He’d found his niche.

“I liked competing. I liked the head-to-head pressure,” said Smeeton. “I gravitated to individual sport, where I have the final say in my performance. If I perform poorly, the only person to blame is me. On the other end of that, if I perform very excellent, then I can give myself a pat on the back.

“I just kept going from there.”

Straight into those terrific years at Henry Wise Wood High School. Among Smeeton’s achievements, the Calgary Booster Club presented to him the Father Pat Gallagher Memorial Award, which goes to the boys’ top cross-country runner.

No surprise, post-secondary programs expressed sincere interest. The University of Tulsa, for instance. Canadian schools such as Windsor and Victoria and Calgary.

But Smeeton does not regret his decision to accept OSU’s scholarship offer. He likes his coaches. He likes his teammates. And he appreciates the perks of belonging to one of the Power Five conferences — Big 12 in this case.

He’s at home in Stillwater, a city of 50,000 in the north-central part of the state.

He knows now where to satisfy his sweet tooth — the closest Walmart. “They have a thousand different kinds of Oreo cookies and ice creams. Flavours you’ve never seen before. Just crazy.” And what he craves from home, he can get shipped. Smarties. Coffee Crisp chocolate bars.

What he does not miss? Pounding out miles in winter weather. And in case Smeeton needed a refresher, Oklahomans, a year ago, had been hammered by snow storms and freezing temperatures. “A lot of Calgarians would’ve been, ‘This is just Tuesday for us,'” he said, chuckling.

But runners run, rain or shine or whatever.

And through everything — including wicked stretches of Oklahoma heat — they put in the work.

“That’s where you have to be disciplined. Motivation can start you off, but I think discipline gets you to the end,” Smeeton said. “It’s all building blocks. You make those little deposits to the bank every day. Then (on race day), you make that big withdrawal and it’s all worth it.”