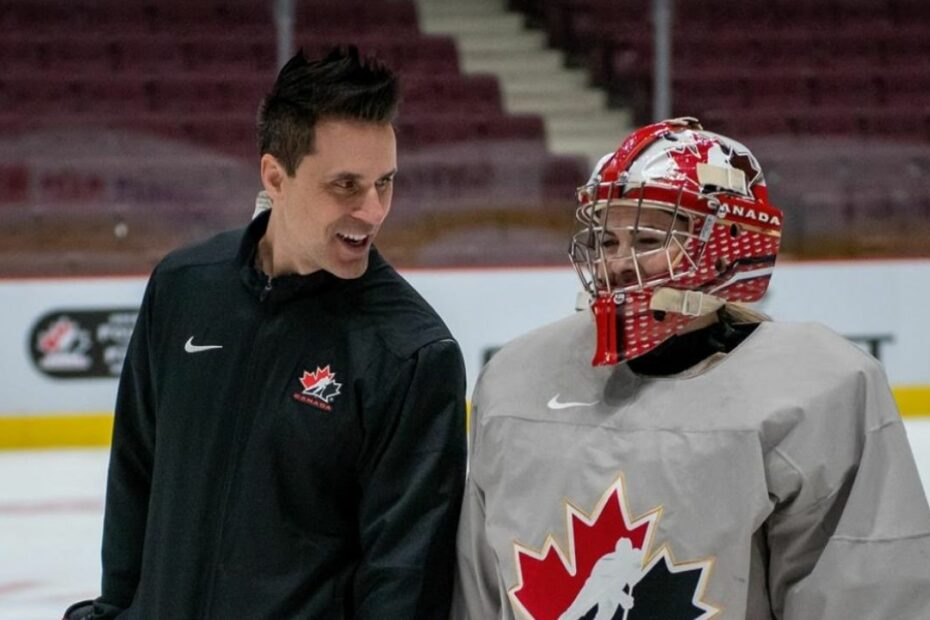 In this town, Brad Kirkwood wears a lot of hats.

Among the many roles the local goaltending guru embraces is a very special one.

No surprise, it’s with keen interest that Dad monitors the adventures of his two sons, both netminders. “There’s nothing better.”

If playing goal is the most pressure-packed position on the ice, imagine being perched in the stands, on the edge of your seat, as the parents of a goalie. That’s got to be the most stressful job of them all, right? “That’s 100 per cent accurate, 100 per cent,” said Kirkwood, laughing.

His kids, though, are thriving.

Kaiden — a 17-year-old who plays for the Calgary (Midget AAA) Buffaloes — is listed by the Tri-City Americans of the Western Hockey League, while Kannen, 14, works the crease of the Calgary (Bantam AAA) Flames.

And Kirkwood, who built his own path in hockey, is there to support them. “That’s pretty much the only thing in life I can help them with.”

Asked if there had been any chance the boys would take up another position, Kirkwood laughs. In other words, no.

“You know what? I was kind of hoping they wouldn’t be goalies,” he said, “because I enjoyed watching their games.”

Then, as his base of netminding knowledge broadened over the years, Kirkwood’s viewings became somewhat complicated. “Now I’ll have two answers. As a dad, it’s, ‘I thought you played an outstanding game.’ As a coach, it’s, ‘I thought we could’ve done A, B, and C.'”

In addition to keeping track of his kids, in addition to running his own goalie-coaching business — Top Prospects Goaltending — Kirkwood himself is on the ice, seemingly everywhere in the city.

For years, he’s been in charge of polishing the University of Calgary Dinos’ goalkeepers, on both the men’s and women’s squads. Recently, he began to groom the puck-blockers of the WHL’s Calgary Hitmen.

And right now? The 49-year-old happens to be in Beijing where he’s helping to guide the goalies of the Canadian women’s team through the Olympic tournament.

“It’s pretty crazy, but it’s great,” said Kirkwood, managing to find time for a phone chat a couple of days before departing for the China. “When it’s your passion and you enjoy coming to work every day, that’s what you strive for.”

On behalf of Team Canada, he’s worked a couple of world championships.

And, in 2018, he accompanied the women to the Olympics in PyeongChang, a next-level kind of thrill.

“Kind of the big brother, the big sister, to the world championships — that’s how I would best describe (the Winter Games),” Kirkwood said. “It was a great experience. Any time you get to work with the top coaches in the country, in the top organization in the world, you can’t help but learn from the staff as you go.

“For most people, it’s once in a lifetime. For some people, who are lucky enough to be in a coaching capacity, it can be a couple times.”

While having been too busy with hockey’s intense schedule to check out any other sporting events in South Korea, Kirkwood said he enjoyed the chance four years ago to strike up conversations “about life in general” with non-hockey folks — players and coaches — at Canada House.

But also to pick their brains, specifically about lead-up routines — night before games, day of games.

“It’s always cool to learn what athletes in other sports are doing to prepare,” said Kirkwood. “At times you take that away and use it for your own preparation.”

Learning, in other words, never ends.

As a kid growing up in Red Deer, Kirkwood tried all the positions —”like all little squirts do” — before gravitating to net in peewee.

With hopes of NHL glory, he moved through the minor-hockey ranks, playing midget at home before venturing to Sherwood Park for Junior A exposure. Later, enrolled at the University of Alberta, he realized he still had a “hockey itch.”

Stepping up to the pro game, he endured an uneventful winter with the ECHL’s Columbus Chill. He didn’t play much — the other goalie, on an NHL deal, got more attention. And when he did get the net he would “just get thrown to the wolves.”

This had been the year of the NHL lockout, 1994-95. When big-leaguers returned after Christmas, experienced players began to filter down through the minor-league system. Kirkwood was released.

Still interested in the business of parrying pucks, he decided to try the English Premier Ice Hockey League. And he loved it. “You kind of realize your NHL journey is over” — and, with that, the burden of the North American racket lifted. He no longer had to worry about who was being promoted, who was being cut, who was being signed, who was being the favoured.

Making the most of the no-fuss scenario, Kirkwood excelled.

“I got to relax and play some of my best hockey,” he said. “Popping overseas with a more stable contract and a bit of weight off your shoulders, it was huge just to be able to play and enjoy hockey.”

Tending the nets for the Peterborough Pirates, Guildford Flames, Milton Keynes Kings, he stayed there for four years.

“It’s not a place that you would think is known for hockey or where the sport’s that big,” Kirkwood said. “But, man, it’s just a whole other atmosphere … singing in the stands. The fans are so passionate. They travel around and follow their teams to everywhere they play. And you’re treated very, very well by the owners, by the teams, by the communities we lived in.”

Kirkwood dug the scene so much that he considered returning for the 1999-00 campaign. But in the offseason he learned that his application to the Calgary Police Service had been accepted.

“At the time, it was really competitive to get in,” said Kirkwood. “I thought I could probably realistically play four, maybe push it to five, more years. But then what am I going to do for a career after that?”

So, at the age of 27, he mothballed his pads and joined the CPS, for whom he continues to work. Nearly a quarter of a century now.

Barely a year into his career in law enforcement, Kirkwood got a call from Hockey Canada. Could he drop by, run a few clinics for them? He didn’t hesitate.

“I just thoroughly enjoyed it.”

Before long he was organizing his own camps, all the while soaking up the evolving world of netminding. Because the budding goalies of new millennium did not resemble the templates of his day.

“Obviously, when I played it was a different style,” said Kirkwood. “I’ve learned more about the goaltending position by coaching. I’ve had to study what I would term the new way of playing, the butterfly way. So I’ve become way more of a student of the game.”

“We had that connection,” he said. “It started out as, ‘Oh, should we try it?’ It ended up being a great working relationship.”

There is no disputing that. In Kirkwood’s first winter helping out with the Dinos, 2010-11, Dustin Butler was named the top university goalie in Canada. Then through the dressing-room doors came the top-flight likes of Kris Lazaruk, Jacob De Serres, Steven Stanford, Matt Greenfield. “I was lucky enough to get some really good goalies,” said Kirkwood. “We’ve been able to produce professional goaltenders out of that program for many years.”

To his schedule, he soon added the Dinos’ women.

Then when goalie coach Jason LaBarbera left the Hitmen to join the Calgary Flames, Kirkwood jumped at the chance to fill the role with the WHL outfit.

“It’s something you’re passionate about and you’re working with good people,” he said. “It made it pretty easy to be on the ice.”

Good thing. Because Team Canada duties now represent a sizeable portion of his bandwidth. He gets to work with the top goalies in the country, preparing them to stare down the world’s nastiest shooters.

Hockey Canada shared the names of women’s team staffers and players weeks ago. Always a gratifying moment — even if, in this case, it had been a formality.

“You hear from friends and family and things like that,” said Kirkwood. “It hits home when everything’s official and it’s placed out in the media.”

The Canadians open against Switzerland, the kickoff match of the tournament schedule. “It’s just as exciting as your first (Olympics), for sure.”

At his disposal are three home-grown goalies — Kristen Campbell, Ann-Renée Desbiens, Emerance Maschmeyer — and there isn’t a cookie-cutter approach to the job.

“If you want to say coaching’s coaching, it is,” said Kirkwood. “But each goaltender learns differently, each goaltender has a different style. It’s very much a relationship-based business. That’s probably, at the higher levels, is the most important part of this job.