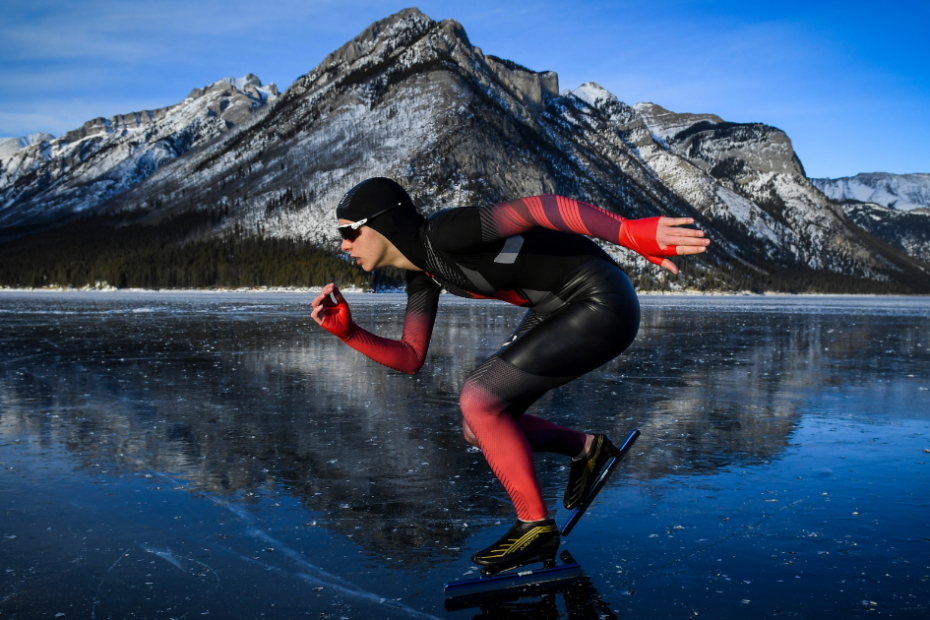 Mid-day and mid-winter, Brooklyn McDougall joins the Zoom call. It’s one of probably millions of video conferences taking place on that Monday.

But there is nothing ho-hum about the chat. This is no eye-glazer.

Rather, as McDougall knows, it’s something that could prove unforgettable — and it does.

Because she gets to hear Speed Skating Canada officials announce that she is officially part of the team bound for the Olympic Games. There is instant relief, the feeling of having fulfilled a dream, and more.

“Also how proud I am of myself and my teammates that we made it to that moment — at times it was hard to see the light at the end of the tunnel,” said the Calgarian. “I was just thinking about everything that we had been through the last two years and how we really had to persevere through a lot of roadblocks.”

Starting with the obvious hurdle — the COVID pandemic, which slammed shut last season’s international schedule. For McDougall, an up-and-comer, someone eager to accumulate experience, that adds up to more than an inconvenience.

If that hadn’t been unsettling enough, mechanical issues at the Olympic Oval in Calgary, headquarters of the national crew, pushed skaters off the premises. Making do, they visited the outdoor loop in Red Deer. There were also laps at picturesque Gap Lake and Ghost Lake. Snapshots of those workouts look like postcards.

“It was very romanticized,” said McDougall, “but, also, those were probably the coldest days I’ve ever skated outside. It wasn’t super enjoyable in the moment. Looking back now, it’s pretty cool to see that, to have that memory, to have those photos forever. But it was mentally challenging to get through that.”

Off the ice, too, came tests of tenacity. Because of restrictions, workout facilities had been unavailable. So McDougall, with help from her dad Scott, turned the family garage into a makeshift gym, which included a homemade squat rack.

She wasn’t alone. All over the place, skaters were doing what they could to stay sharp through what they hoped was the worst of it.

Thankfully — in hitch-free fashion — the 2021-22 season opened. And in December, only a couple of months before the opening ceremony in Beijing, the country’s finest speed skaters gathered in Quebec for the Olympic trials. Right in front of them, finally, was the assessment everyone had been anticipating.

But Omicron forced the cancellation of the event. So what now? “We were training,” said McDougall, “but we didn’t really know who was going to be named to the team.”

Eventually it was determined that McDougall — national champ in 500 metres and top-ranked Canadian woman at that distance on the World Cup circuit — deserved the privilege of donning the Maple Leaf at the Olympics.

An appreciative sort, she tapped out heartfelt thank-you notes to those who have provided support over the winters, including the Calgary Booster Club (from whom she received the Art Smith Endowment Grant for four straight years). “Funding is obviously very difficult for amateur sports, so it made a huge difference — I wanted to make sure they knew that.”

In this case, of course, money was only one of the obstacles during an unprecedented stretch of adversity.

So — given the times, given the public-health measures — could there have been a more fitting mode of communication for the skaters to learn their fate on that January afternoon?

“Kind of funny being on a Zoom call and finding out that I’d made the Olympics after so much uncertainty,” said McDougall, chuckling. “It wasn’t how I expected to make the Olympics — in the midst of a pandemic — but it was still very special, looking back on the last two years and how difficult it was.”

Meaning there is no doubt that she and her peers will have plenty of tales to tell their grandkids.

She laughs. “We’re going to be looking back on this whole situation, for sure.”

Unlike the wild roller coaster of a lead-up, the Olympics did hit the right notes.

“I loved it,” she said. “It was one of the most special moments of the Games. Seeing the Olympic rings rise, that made me very emotional. It was really cool to see that in person and to realize that I had achieved this childhood dream of mine.

“Walking in with my teammates and other incredible athletes, it was really amazing. It was kind of like a dream that evening. It’s something I’ll cherish forever.”

That box ticked, McDougall — no different than most athletes at the Olympics, especially first-timers — tried to convince herself that competing in Beijing would be no different than any other race. Same distance. Same rivals. Same aim. “The days leading up, I felt very good.”

However, her Feb. 13 race was slated for 10:15 p.m. local time, which gave her hours and hours to stew, to start feeling nervous.

“Even though my brain wasn’t in the most ideal place for racing,” said McDougall, “I did have confidence that my body could race the way I knew I could.”

Slotted in the ninth pair, alongside Dutch racer Femke Kok, she posted a time of 38.84 seconds — 1.80 behind the eventual winner, American Erin Jackson — good for 22nd place.

“Overall, I raced as well as I could,” said the 23-year-old. “I’m proud of myself for how I performed, but there is a lot more there as well. I definitely learned a lot.”

McDougall plans to dedicate herself to the 2026 Winter Games in Italy. A big commitment, but an easy decision.

“I feel that I’m not satisfied with everything that I’ve accomplished,” she said. “I’m looking forward to this next quad to see what I can do.”

Post-Olympics, McDougall returned to Calgary, caught her breath for a week, then flew to Norway for the World Sprint Championships. Days later, she was in the Netherlands for the World Cup Final.

Of the hectic pace, she says she wanted to continue to collect experience — to gather as much as possible leading into the next Olympics.

Grand plan — but one that took its toll.

“I was definitely pretty drained and I could notice that in my racing, too — I was very, very drained,” said McDougall. “Now I’m kind of recovering mentally and emotionally as well. I’m just regrouping.”

Growing up in Signal Hill, a neighbourhood in southwest Calgary, McDougall was a standout golfer. But at the hockey rink, she excelled.

“That was how my Olympic dream started — I wanted to make Team Canada.”

A defenceman, she started chasing pucks when she was five years old. By the time she was 15, she was on Team Alberta’s radar. While the idea of skating precision always appealed to her — “I’d go to WinSport in the mornings for extra technical sessions before school” — she was enjoying the game of hockey less and less.

“I just needed a change,” said McDougall. “It was a big decision.”

After her squad got eliminated from the 2014 playoffs, she knew it was time. Waiting for the Sochi Olympics to finish, she reached out to a national-team coach and learned about Speed Skating Canada’s talent-identification program. “This was RBC Training Ground before RBC Training Ground was a thing.”

Weeks later at the Olympic Oval, McDougall tugged on an unfamiliar style of skates, with blades that were long and narrow and hinged at the forefoot. Recalling those first moments on ice, she laughs. “Very, very different.”

But she loved it. Mind made up, she contacted the coaches of Team Alberta. “To let them know that I was going to decline my spot, that I wanted to focus on speed skating instead,” said McDougall. “Looking back, it was a quick decision. I’d only been on speed skates for a few weeks and I was gambling on it being something I would love to do and enjoy for years.

“Who knows how far I would’ve gone (in hockey) if I’d stuck with it? But I think it was a good decision for me to switch to speed skating when I did.”

Early returns suggest her hunch was correct. In McDougall’s first full year of racing, she landed on the provincial team that competed at the 2015 Canada Winter Games.

“I definitely started realizing that I did have a lot of potential,” said McDougall. “I wanted to take it as far as I could. It was a very great introduction into the sport.”

Only months into here new pursuit, she admits that she had been already thinking about the Olympics. “I wanted to give it my all and take that chance. I didn’t want to be afraid to dream big.”

More validation was on its way. She qualified for the 2017 and 2018 world junior championships, which boosted her confidence and gave her an eyeful of the international scene.

At the same time, athletic promise was being matched by educational drive.

While entrenched in the racing realm, McDougall enrolled at the University of Calgary. “It was busy, but I really enjoyed it. They are both healthy distractions from each other.”

She graduated with a biological sciences degree a year ago. Given her passion for research — “It really intrigues me” — McDougall has spent hours working, at times as a volunteer, at Foothills Medical Centre.

Now, however, McDougall is focused on only one thing — resting her 5-foot-9 frame.

Because in only a month’s time, she will resume workouts.

By June, she and her teammates will surge into a block of short-track skating — ideal training for corner efficiency. A month later, they return to the Oval’s long track to ramp up for the 2022-23 campaign.

So at the moment? Her feet are up.

“The sport itself is very hard on our bodies — and it’s that much harder when you’re emotionally and mentally drained,” McDougall said. “I’m just taking advantage of the time now to recover from basically the last two years, because it has been a very stressful time.”