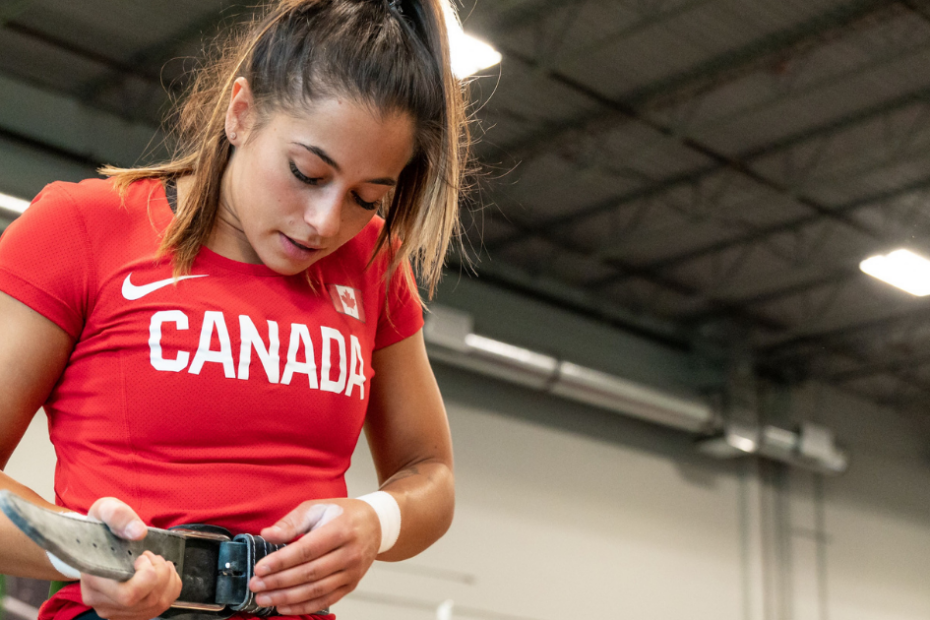 The homespun wisdom brings comfort. And Hannah Kaminski can recite the entire monologue, all 40 minutes’ worth.

But she still listens daily to a recording of Matthew McConaughey’s commencement address to University of Houston graduates. One of the episodes on the Money Is Not Evil podcast, the Oscar-winning actor, in that familiar cadence, spells out his 13 truths. McConaughey’s opening nugget? “Life is not easy … so don’t try to make it that way.”

Kaminski had been in a terrible rut the first time she heard the speech. A world-class athlete training alone in her mom’s garage, motivation was becoming an issue.

Now his words crackle through her ear-buds, providing the soundtrack to her warmup — every single day.

“It’s part of this weird ritual that I’ve created for myself,” said Kaminski, the top 49-kilogram weightlifter in Canada. “I found that it got me in a better head space to be present. It reminds me how I can be the best Hannah I can be, and when I am being the best version of myself, that is when I always train my best.

“I’m a real creature of habit, so I listen to this podcast, then I’m in my own little world while I train.”

Mojo rebooted, Kaminski has also grown to embrace the makeshift gym. She even digs the pared-down nature of her pursuit.

No spotters. (Just as well. “Somebody standing behind me stresses me out.”)

No national-team peers. (She’s the lone Calgarian — and one of only a few weightlifters based west of Toronto.)

No coach. (He lives in Winnipeg. “Being coached virtually has been really interesting.”)

Because she’s discovered that she prefers to sweat in isolation. “I’m way more focused and intentional with my weightlifting,” said Kaminski. “I’m a pretty social person, but if I’m social it takes away from my focus. So another blessing in disguise from COVID was learning that I’m actually way more efficient when I’m just on my own.”

Occasionally — “When I’m not a hermit … when I feel like joining humanity” — she heads for Evolve Strength Sunridge and King’s Fitness, but the bulk of her prep-work is done in private.

In the garage, with only McConaughey’s voice for company, Kaminski gets to control all aspects of her three-hour workouts, six per week.

Nothing — ever — changes about the routines. It’s that kind of sport.

“I love that it’s so monotonous,” said Kaminski. “I think most people would just be bored silly by it. But I love it. Because it’s the same thing every day, you can see these really small improvements on a day-to-day basis. You find a flow.

Another way to track progress? The events of Feb. 26.

At the Canadian Invitational in Scarborough, Ont., Kaminski hoisted 163 kilograms (snatching 70, clean and jerking 93), one kilogram better than the national standard.

She finished as the top Canadian in her weight class.

And, among the Commonwealth field, she placed in the top eight.

Those three boxes ticked, Kaminski earned a berth in the 2022 Commonwealth Games. A feat worth celebrating, especially for an athlete moonlighting as a University of Alberta nursing student (a commitment that requires regular trips to Edmonton for labs).

“It was super, super fun because I got to qualify on home soil — just a fun experience,” she said. “I told myself that I just wanted to be really proud, regardless of where I placed and the outcome of it. It was the best competition I’ve ever had, in terms of my mental state and how I performed. I was so, so excited that I hit the totals and did everything I needed to do.

“It was like I could retire happily because I performed so well. I had fun. I was present. I had a great day.”

“With sport, you live for these one per cent moments,” said Kaminski, 28. “Everything you’ve done coming to fruition, it just happens so rarely. So, really, it was such a great moment, where you’re, ‘Oh, all that hard work and not giving up, it amounted to something.’ So it’s encouraging to keep doing the same thing.”

Athletic glory has long been on Kaminski’s mind.

Growing up in Calgary, she did gymnastics till she was 12, then she began wrestling. She excelled, grappling in junior high, through her days at Bishop Grandin High School, then in the varsity program at the University of Calgary. “The trajectory was the 2016 Olympics.”

But she hurt her right rotator cuff, an injury that got worse and worse. “It became this perpetual thing. I would sneeze and my shoulder would dislocate.”

Surgery addressed the damage, but her career was over. If she wasn’t able to wrestle, she figured there was no sense staying in school. Dropping out, she was stumped. “Literally, not knowing what I wanted to do with my life.”

But when family friends living in Australia planned a European holiday and needed someone to house sit, Kaminski jumped at the chance to go to Melbourne.

And it was there in 2016 — while working at a gym (for the sole purpose of getting a free membership) — that she got introduced to a new sport. A local weightlifting club was based at the same facility. The coach, a former national champ, noticing her strength and compact five-foot frame, approached her one day.

“He said, ‘Have you ever weightlifted before?’ I’m like, ‘No.’ He says, ‘Do you want to try?’ And I was like, ‘OK. Why not?’ I wasn’t really doing anything else. I wasn’t really interested in it at the time, but he said, ‘You have the build for it. You might be good at it.’

“Then I did better than I expected.”

Well, not right off the bat. Wrestling and weightlifting may have similar elements — speed and power. But the latter required something else for success, taking practice peaks to the event platform. In short, executing on demand.

“Competing is actually like a performance,” explained Kaminski. “You’ve already done this (weight) in training — you know already if you can do it or not — but it’s about doing it in this instance. It’s more of a performance.

“It was this really big learning curve — ‘Oh, my athletic ability coming from wrestling doesn’t carry over at all. This is a totally new beast.'”

But as someone who had been a member of the Young Canadians, the challenge of getting comfortable on stage was quickly overcome. Gains being made, what was supposed to be a three-month stay turned into two years.

Entering events around Australia, she did well. How well? She qualified for the 2018 Commonwealth Games — but everyone had assumed she was an Aussie. “So there was this oh-crap moment.” Expediting a passport was one option.

“In the end I decided I wanted to be able to compete for Canada.”

Because after dislocating her left elbow during a snatch, after seeing her car give out, she made up her mind. “All these little signs” meant it was time to go back to Calgary.

Elbow rehabbed — and an unknown commodity in her own country — she geared up for the Canadian championships. She wound up on the podium.

“That’s when everyone was, ‘Who the heck is this person?'” said Kaminski, chuckling. “That’s kind of when I’ve always done my best, when I’m just in the shadows.”

As she heads into the Commonwealth Games, Kaminski’s profile is sure to get a boost.

Coping with a long list of injuries — hyperextensions of both elbows, thoracic outlet syndrome in both hands, torn ligaments in her left foot, torn hip labrum — she’s made efficiency a priority during the past year.  And she’s better for it.

“I have typically been a strong athlete, but not a very technical athlete,” she said. “I’m strong as an ox … (but) my focus has been on building technique.”

Soon, there will be even more opportunity for fine-tuning.

In a couple of weeks Kaminski’s nursing classes with be over. And, for a change, she’s not shouldering spring and summer courses, so she can devote herself to being a full-time athlete.

Canadian championships are slated for next month in Kelowna, B.C., where she’ll compete in the 55-kilogram class, instead of the 49. (It’s a decision that spares Kaminski, who walks around at 52 kilograms, the ordeal of having to cut weight twice in a relatively short amount of time.)

In the final preparation prior to the meet in England, a national-team camp is planned for Sweden.

She acknowledges the well-established excellence of India’s Saikhom Mirabai Chanu, silver medallist at the 2020 Olympics. But it’s worth pointing out that on the rankings of Commonwealth lifters, Kaminski slots fifth, which means she’s a bona fide contender.

“For second and third place, it’ll be a real bloodbath because we’re all within a couple kilos of each other,” she said. “It’s really exciting to go from not even knowing if I could qualify for the Games … to looking at where I am, ‘Oh, I actually have a chance to podium.’ That’s sort of what’s in the back of my head while I’m training.

“It’s going to be a really fun fight.”

And Kaminski knows what that looks like. She’d been glued to the TV in the summer.

Since she was a kid, watching the Olympics had been “better than Christmas,” in her opinion. And Tokyo’s version offered something new, a viewing bonus.

“Really cool — for the first time I had friends and teammates there,” said Kaminski. “I’d trained with them, so it was extra exciting. It definitely lit a fire under my butt for Paris. It opens up a lot of belief that it is an attainable goal.”

Securing a trip to the 2024 Summer Games would be sweet. A legitimate step toward France is participating in the Commonwealth Games, and she doesn’t deny the heft of that accomplishment.

“I’ve had lots of coaches and people in my corner say, ‘This is something you can do,'” said Kaminski. “It was a moment where I was so grateful that those people had pushed me in that direction when sometimes even I didn’t feel I could do those things. It’s really cool to be working towards something for so long and then, ‘Oh, I did it.’

“Grateful is a good word, actually.”

Particularly after investing all that energy into wrestling, only to have it completely collapse, leaving her as a sore-shouldered college drop-out with no goals. “Then weightlifting found me.” She laughs. “I went from one singlet sport to the next singlet sport.”

Now Kaminski — with long-term plans for a career in midwifery after she graduates with her nursing degree — is a rising star.

“I feel I’ve been given this second chance with weightlifting, which is pretty cool.”