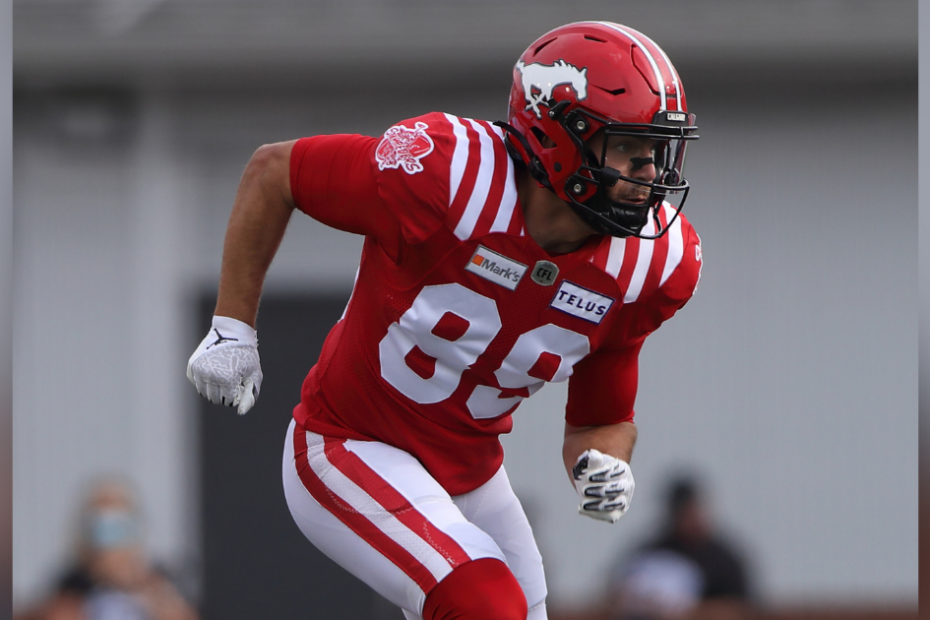 Drafted last month by the Los Angeles Chargers, Deane Leonard created a heap of local buzz. This is a young man who, before transferring to Ole Miss, had suited up for Notre Dame High School and the University of Calgary Dinos.

Now Leonard is bound for the NFL.

The CFL’s draft also featured Calgary-flavoured storylines, including the Stampeders using their first-round pick to latch onto Jalen Philpot, a member of the Dinos.

Football is a small world — and a snug community in Calgary — so naturally Colton Hunchak is friendly with both newsmakers.

Of Leonard: “I was actually talking to him a couple days before the draft. It’s funny. He had a pretty good idea that he’d be going to Los Angeles.”

Of Philpot (whose twin brother Tyson was later selected by Montreal): “Obviously, I’ve had an opportunity to talk to them, to get to know them a little bit. I know they’re really good athletes.”

Around here, no surprise, those developments — Leonard heading south, Philpot staying in Calgary — generated headlines and soundbites. Hunchak understands that kind of attention. But, fair to say, he knows well the other end of the hype spectrum.

“Well, it’s a pretty good story,” said Hunchak. “That day’s always going to seem fresh. It was a long one — a long stressful one.”

Starring for York University, he had been primed for the 2019 CFL draft. This was going to be a big deal. Six of his family members flew out to Toronto, and the chair of the school’s football alumni association was hosting a watch party.

Made sense. After all, York boasted five highly touted players.

Off the board relatively quickly had been two of his teammates — Nikola Kalinic, 10th overall, to Hamilton; Jacob Janke, 35th, to Saskatchewan. “From there, it was just a waiting game,” recalled Hunchak. “We were sitting there, with probably 50 people surrounding us, just refreshing the computer.”

Fifth, sixth, seventh rounds, nothing. Well into the eighth — and final — round, crickets still.

“I literally walked out of the house,” he said. “It was probably midnight at this point in time. I just started walking down the street, thinking, ‘All this hard work that I’ve put in and my name’s not getting called. And that’s a career for me.'”

Snapping him out of his self-doubt was a commotion. A couple of his chums had bolted outside and started yelling, letting Hunchak know that he had been drafted, that he was going home.

The announcement filled him with relief — and a mashup of emotions, bitter and sweet.

“Super super happy and grateful for the opportunity, but, for lack of a better term, I was a little pissed off,” said Hunchak. “I mean, every other team skipped me, as well as Calgary in seven other rounds, right? I was the last one. I was a toss-up in the air. I’m like, ‘You know what? I’ll show you guys.'”

He had heard rumours that the Stamps, with the last choice, had been considering a defensive back from another Ontario school.

He’s not sure if that’s true.

But what he does know — thanks to a recent chat with Dave Dickenson — is that the head coach vouched for him at the draft table. As a teenager, Hunchak attended the Dickenson Passing Academy, a wintertime clinic in the city, so he’d become a known commodity to the camp’s namesake.

Already in hand for the Stamps were eight prospects (thanks to an extra fourth-rounder) — two defensive backs, two offensive linemen, two linebackers, one defensive lineman, one wide receiver. With one selection to go, Dickenson cleared his throat in the war room: “Hey, guys. I know we have all these boxes checked off. Just throw me this one bone. Trust me on this one.”

The Stamps brass bit and, just like that, Hunchak joined his home-town heroes. “I’m so happy that Dave took that opportunity to pick me up. Because if not, who knows? I may not be playing football right now.”

When Pete Costanza reached out to welcome him aboard, Hunchak informed the receivers coach that he would not be outworked, that he would do all he could to make a difference.

“That’s where it all started.”

Then again, for Hunchak, football has been an obsession for 20 years — and he is only 24.

Growing up in Hidden Valley in the city’s northwest, he was playing flag football as a wee lad, pestering his father Todd about signing up for the “real” deal.

To keep his two football-mad sons happy — Brett, by two years, is the eldest — Dad went online and ordered pint-sized outfits. Pants, helmets, jerseys in the colours of the New York Jets and New England Patriots. Then, wisely, he got out of the way.

“Me and my brother used to go at it,” said Hunchak, chuckling. “That’s probably where the fearless (nature) came from. Being in the backyard and having your older brother beat on you all the time. It was good. I thank him for it, for sure.”

Eventually, the boys joined the Mavericks (for whom Deane Leonard would also see action). Yes, tackle football. Finally. “I fell in love with it.”

Both boys did. Brett turned into a quarterback. His baby brother? A passer, too, unless he was on a team with Brett. Then he’d line up as receiver.

“Always in the back of our mind was that we wanted to play professional football,” said Hunchak. “But we were pretty much just invested in the moment, to be honest with you. You have to love the process to go a long way in this game.”

Which, step by step, is how it went for Hunchak & Hunchak — through the Mavericks ranks, through Notre Dame’s powerhouse program, through national-team appearances at the International Bowl, through York University.

These days Brett, following a season in Sweden, is playing in France. “I’m really proud of him,” said Hunchak, “to experience that culture, that different part of the world.”

For Hunchak, after squirming through the anxiety of draft, it happened fairly quickly. Signed, invited to camp, released, returned to York, recalled for practice-roster duty, promoted, embedded.

“I had no worries once I got drafted that I was going to make the team or, at least, have a career in the CFL and hopefully a pretty lengthy one,” said Hunchak. “Just because I knew my assets and knew what I could bring to the table. I felt that my game translated pretty well to the CFL.”

He had been assigned No. 80 in camp. But by the time he was added to the active roster, that jersey was taken. Handed No. 89, Hunchak didn’t turn up his nose. “I grew up watching Steve Smith with the Carolina Panthers. He kind of had a dog mentality. I really pride myself on the blocking game and the physicality of the game of football.”

His evolution — draft-day afterthought to game-day contributor — is commendable.

In the fall when Notre Dame dynamo Tieso Piscionieri had been chosen as the Division 1 winner of the Harry Hood Memorial Award — a Calgary Booster Club honour recognizing athletic prowess, academic excellence, community engagement at the high school level — he brought up Hunchak.

“I’ve talked to him a couple times at coaching clinics,” said Piscionieri. “He’s a big role model for me, for sure.”

In the eyes of the kid — who happened to wear Hunchak’s No. 5 sweater at Notre Dame (and last month committed to the Dinos) — the Pride’s former standout revealed a road map. Local club and high school football. University education — Hunchak used the CFL’s scrubbed season of 2020 to polish off his Business and Society degree. Professional deployment.

“That’s really awesome to hear,” Hunchak said of Piscionieri’s unprompted shout-out. “For him to mention my name, I’m honestly honoured. He’s a really good kid with a really bright future.”

Hunchak’s offseason preparation is in the books.

Dutifully he rehabilitated his foot — a ruptured plantar fascia from last year’s playoffs — then invested five weeks into a program based in West Hollywood, Calif. “It was really good to be down there and work out with a bunch of guys from the NFL.”

Stamps camp is around the corner. Hunchak, by now, knows what to expect from the coaches, from the teammates, from the doorstopper of a playbook. (“The terminology is gibberish to the Average Joe. A U Sports team that doesn’t go in depth … they’ll have a play call with two words in it. You come to ours and there’s sometimes 12 words.”)

Familiarity, however, does not mean easing into things. That kind of mindset is dangerous. It’s football — guarantees are nonexistent.

“There’s never any time to chill,” said Hunchak. “You’ve got to keep progressing. If not, there’s going to be another Mr. Irrelevant coming for your job.”

Mr. Irrelevant is the nickname traditionally hung on the last player chosen in the NFL draft. While no one teases Hunchak about being the CFL’s version, the indignity remains vivid.

“Always a reminder for me,” he said. “Not a chip on my shoulder, but just added motivation. It’s something I’m never not going to think about. It’s always going to be in the back of my mind.”

As Hunchak notes, draft slot does not matter to clipboard-toting coaches. Once camp opens, they’re bent on assembling the best cast.

The Stamps, in the past two seasons, have engaged in 32 regular-season matches — Hunchak dressed for 28 of them. Only two players from the team’s 2019 draft class, Fraser Sopik and Hergy Mayala, have seen more action.

So his message to Amoako, a fellow eighth-rounder, was straightforward.

“Once you walk in, no one’s going to be walking around with a sign above their head that says, ‘First-round pick,’ or, ‘Last pick in the draft,'” said Hunchak. “Just make the most of your opportunities when you come in. Just be all-in.

“You’re going to get a chance to show your worth, right?”