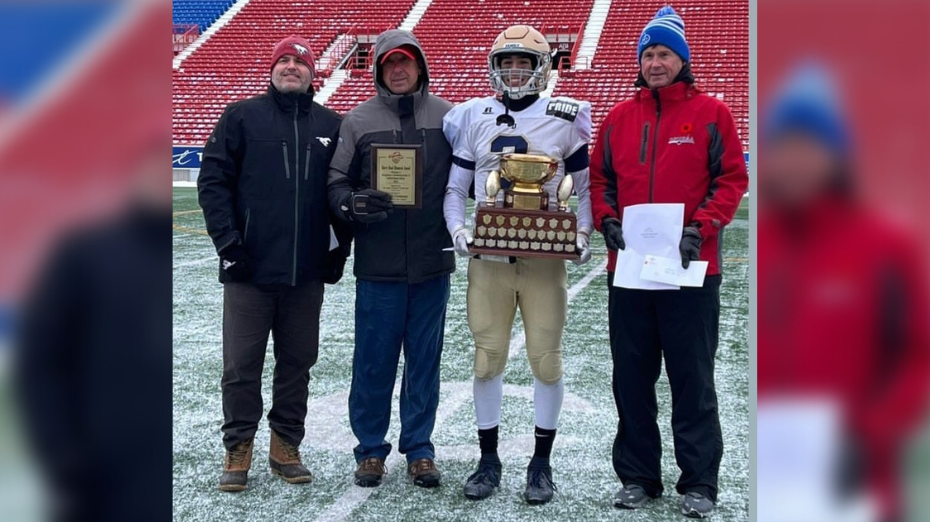 No different than many kids in these parts, Matteo Civitarese kickstarted his athletic career on the city’s soccer pitches.

By the age of five, he was roaring around in hot pursuit of the ball and, occasionally, bumping into someone. All in good fun, of course.

A few years later, after a gentle nudge from his father Aldo — who, in his heyday, had played football for the Hilltoppers and St. Francis High School programs — the boy decided it was time to get a taste of the gridiron. Joining the Mavericks’ atom side, Civitarese, then 10, was captivated by this new activity. Football, he realized immediately, was going to be his thing.

“In soccer, I always played really physical — and, obviously, soccer’s not a really physical game,” recalled Civitarese. “Once I got into football, I really fell in love with just being able to hit people and run at people full speed.

“The collision aspect of the sport and just how physically the game is played made me fall in love with it right away. I haven’t looked back since then.”

Suiting up as a running back and a defensive lineman in those days, excellence followed him. But, over the years, some things did change, including his physique. “I was bigger as a young kid,” he said, laughing. “Now I’m just a skinny receiver. My body transformed really quickly going into high school.”

But, at 6-foot-2 and 200 pounds, he remains every bit as effective. An established offensive star at Notre Dame High School — someone, who, without COVID’s interruption, would have cracked the varsity squad as a Grade 10 student — Civitarese takes pride in thriving in all aspects of his life, studying hard and shouldering shifts as a volunteer.

That balanced approach makes the senior a worthy recipient of the Harry Hood Memorial Football Scholarship, which recognizes athletic and academic achievement, school and community engagement.

“It takes a special type of athlete to be as well-rounded as Matteo is. He displays a great passion for everything he is involved in,” head coach David Diluzio wrote in his nomination of Civitarese. “As outstanding as Matteo is on the playing field, he is even a better person off the field. He is kind and inclusive to everyone he meets and is very well liked by all his peers and teachers.”

“All the hard work I’ve put in, in the classroom and off the field and in the community,” he said, “for it to all be in one (award), it’s truly unbelievable to think about.”

Civitarese — and the winners of the Harry Hood Division 2 and 3 awards — will be invited to the Calgary Booster Club’s 69th annual Sportsperson of the Year Gala in April.

“This award is so special to me, just because it’s my last high school football season,” said Civitarese. “Ending it off with this award means so much to me and my family and my school. That’s what makes it so special.”

Despite a nail-biting setback Saturday afternoon at McMahon Stadium — 18-17 to Ernest Manning — Notre Dame’s season is not over. Next up is the provincial quarter-final against Salisbury Composite High School of Sherwood Park.

In the upgaming match expect Civitarese to play a pivotal role as he works nearly every ball-handling position, from wide-out to slotback to tight end to tailback to fullback to kick/punt returner. He may even dabble on the other side of the line since he’s occasionally deployed at safety.

“Overall, he has been one of the most fundamentally sound players that I have ever coached,” said Diluzio. “Matteo prides himself on being perfect on every play. He works to be technically sound, as well as to be an intense player on every play.

“His football IQ is mature beyond his years … he is like an additional assistant coach to his peers.”

Civitarese knows exactly where he wants to go from here.

In the coming months he’ll lend his athletic abilities to the varsity basketball team and the track crew. Last year, he helped the 4×100-metre relay outfit claim the city and provincial championships.

Following the school year, he and his lofty grade-point average are destined for a post-secondary experience. No surprise, Civitarese is drawing interest from Canadian university teams. He’ll make a decision on his destination in January.

“It’s my absolute dream to be able to play football at the next level, which, in Canada, is the CFL,” said Civitarese. “So I think the school that can develop me the best to reach my goal … that will definitely be part of my decision-making, for sure.

“That’s where I see myself in the next five years, hopefully on a CFL roster as well as having my degree and looking for a great teaching opportunity.”

All of this is do-able, especially for driven players. After all, there are currently Notre Dame products in the CFL, and even in the NFL.

So Civitarese can envision a path, and it’s the kind of challenge he’s eager to embrace.

“At Notre Dame — the lessons you learn, the leadership and all the traits you learn — it really helps you going forward in life,” he said. “A huge part of our program is not only developing football players, but great people.”