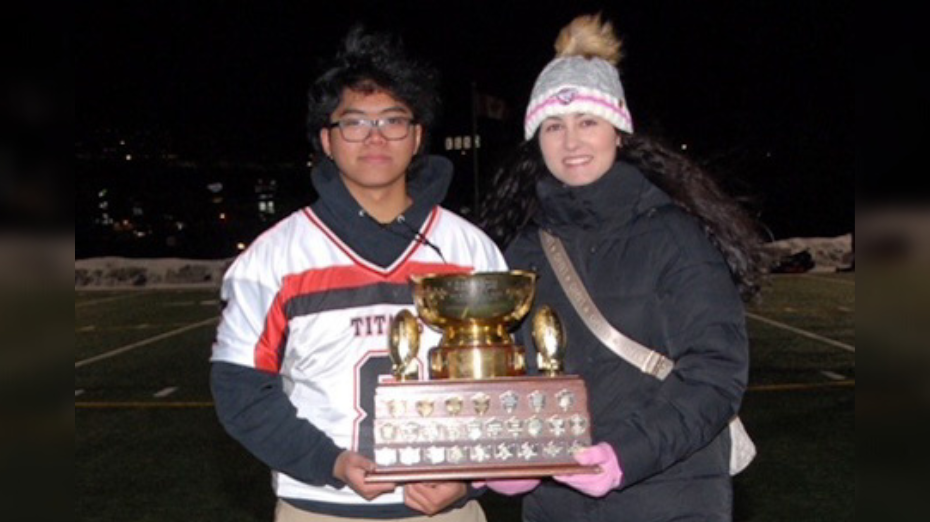 The idea had been straightforward enough. Graduating from junior high and stepping into high school, Khanh Le decided to try football.

He would even give up his first love, volleyball, to do it.

However, the COVID-19 pandemic snuffed out the youngster’s plans. But in the fall of 2021, Le, then a Grade 11 student at Forest Lawn High School, got his chance. He could not wait.

His aim? To line up as a tight end for the Titans.

Le laughs. “I know that’s not the (dream) position you normally hear from people, but I liked the idea of blocking — (because of) the contact — and also being able to run routes and catch balls.”

During tryouts, though, kids were tested to see who could best throw the football. A few of the strongest arms, including Le, were singled out. Then, on the spot, a coach sprung a simple math question on them.

“Just to see who could think the fastest,” explained Le. “As a quarterback, you have to be smart. You have to know a lot of stuff. That’s how he chose me.”

Which came as great news. Sort of.

“I was excited, but I’d also wanted to try defence,” said Le. “But when you’re a quarterback they don’t let you do that.”

Then again, if he was going to hold down the role of signal-caller, there was plenty to get his head around. Especially when, as a quarterback without a drop of experience, you’re thrown into game action.

“First year, it wasn’t the best,” said Le, whose team went 0-6-0 in 2021, but rustled up a 2-4-0 record this past fall. “We definitely did a lot better this season. But the first season was a lot of learning because I had to start from ground zero and work my way up. I’ve learned a lot.”

Despite being a football newcomer, he was named one of the team captains in Grade 11. This year, too, he operated as a captain.

For good reason, according to coaches at Forest Lawn: “Khanh is a true field general and teaches other players in practice and ensures all players on offence are in the correct spot prior to every snap. Khanh is calm, cool and collected. He is soft-spoken but the other students find comfort in his knowledge and abilities.”

By all accounts, this is the ultimate glue guy.

While dedicating himself to football, he still managed to maintain honour-roll grades. Too, he serves as a trainer for several of the school teams and always makes sure to help his younger sister with homework.

“I have three other siblings and my parents are trying to pay for tuition and it’s a lot of money, so it helps,” said Le, who also finds time to squeeze in three shifts weekly at the Tree House Indoor Playground and Cafe, an activity centre for children. “I think the award’s really cool because I’m always trying to do the best I can in school and I like having fun with sports and stuff.

“Being able to balance it and get rewarded for it? It is pretty cool.”

Noteworthy, too, is the fact that in the 65-year history of the Harry Hood award, this marks the first time a Forest Lawn student has claimed the prize. The accomplishment is not lost on Le.

“Because it’s bringing recognition to Forest Lawn, too, with the reputation it has,” said the 16-year-old. “Bringing that kind of attention to it, I think that’s really good for the school.”

A year ago, he had earned the most-improved-player nod on the football squad. He also won the Titan Award as the top Grade 11 athlete at the school.

This year? Le is the team’s top offensive player. And for outstanding leadership, he was the recipient of the Vern E. Langlious Award. “I like leaving my name around the school. Winning awards and that kind of stuff, it means a lot to me.”

Le — along with Notre Dame’s Matteo Civitarese (Division 1) and William Aberhart’s Cameron Fewster (Division 2) — will be invited to the Calgary Booster Club’s 69th annual Sportsperson of the Year Gala in April.

He won’t soon forget how he got word about this latest honour.

There he was, heading into his sports performance course. The teacher there, Jamie LeVesconte, also happens to be one of his football coaches. “At the beginning of class, my other coach, Mr. (Todd) Richards, came in,” said Le. “And they told me in front of the whole class.”

An unreal experience, he says, “but it was pretty shocking, too.” After school, Le waited until his mom and dad were home, “so I could tell them both. They were pretty excited.”

Besides, with the school year far from over, he’s got other athletic goals. On his slate remains a number of adventures — including wrestling, which he’s never done, and rugby, another new-ish pursuit for him.

Le wanted to play rugby in Grade 11, but not enough kids signed up. “But we did have practices, so I kind of learned the basics.”

Also on deck is track and field season, when he’d like to challenge himself in throwing events such as javelin.

Clearly, this is someone who likes to stay busy. But he has also learned the value of drawing a line.

“I try to find at least some time in the day for myself,” said Le. “It’s good for your mental health to find a couple hours for yourself.”