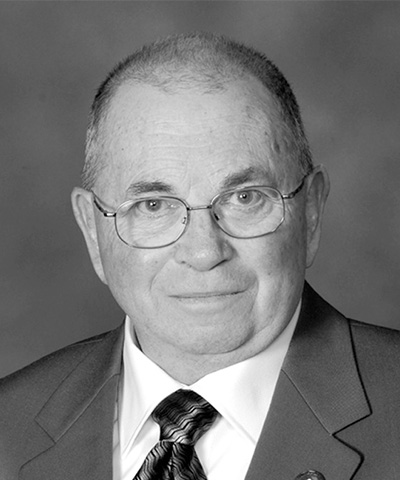 It is with great pride that the Calgary Booster Club names James A. (Jim) Holden as our 2006 Sportsperson of the Year. Jim is described as a “true sportsman” by peers, “conscientious and dedicated” by colleagues and “friend” by all, he is affectionately known as “Coach” or “Commish”. Over the past forty years, this Calgary native has made significant contributions to the development of amateur sport within our community, particularly in the area of hockey. Jim attended Crescent Heights High School and began his employment at the Calgary Herald as a Journeyman Printer.

He retired from the Herald in 1995 after a fruitful 44-year career. Jim has always been interested in sports, never content to be ‘just a competitor’. He played AA hockey with the Calgary Buffaloes. Jim’s aspirations for a hockey career, however, came crashing to a halt when he broke his back. Undeterred, Jim shifted his focus to helping others by becoming a coach and Summer Sports Director for the West Hillhurst Community Association. Jim made sure that every child participating was fully equipped with whatever they required for their sport, be it hockey, baseball, soccer, or badminton.

During the sixties and seventies, Jim turned to coaching hockey teams at many levels, from Bantam to Junior, with success in all seasons. He has an insatiable desire to learn and the best coach he can be. To this end Jim has attended numerous coaching seminars and currently has his Level V CAHA Coaching Certification.

Jim has been very influential in his players’ lives, helping them to advance in their hockey careers, and furthering their education. Jim’s players have played for Team Canada, in the NHL, or receiving university scholarships. Many attest to the inspiration Jim provided, on and off the ice, instilling the values of sportsmanship, hard work and discipline through his friendship, tutelage, and role modeling. Never seeking recognition or credit, Jim has earned three Coach-of-the-Year Awards, and in 1992, was recognized by the Booster Club as an Athletic Leader. In June 1970, Jim (along with several others) created a plan, leading to the formation of Canadian amateur hockey’s greatest association, the Minor Hockey Association of Calgary (MHAC). The MHAC is a model organization, producing a wonderful sports legacy, serving over 1200 participants each year. Jim has effectively contributed to the MHAC in other administrative roles, including Chairman for Minor Hockey Week. Most notably, Jim’s fair, straightforward demeanor has revered him in his role as Director of Discipline for the past 34 years. Jim continues to advocate for the advancement of girl’s hockey and recreational hockey. Jim loves hockey, wanting all children to share in the experiences. Jim has done it all, including driving the zamboni on a few occasions!

A highlight for Jim occurred in 1976. The MHAC won the right to host “the Wrigley” national championship for midget-aged players. Jim was instrumental in the organization of the tournament, and formation of Alberta’s representative team, the Calgary Spurs. The team was victorious in front of a sold out Corral and national television audience. This successful event was a precursor to the Mac’s Midget Invitational Tournament that we enjoy today. In 1998/99, Jim worked with German hockey players from the European Bauer Pioneers Program. As general manager, he provided nine months of opportunities touring Canada and the United States to improve their hockey and life skills. Many went on to play at higher levels in the German hockey system, improving the whole German Ice Hockey Federation. Jim has been an active hunter and member of the Calgarv Pointing Dog Club. He has al provided instruction and leadership as a guide and dog handler for the Junior Pheasant Program. Jim also volunteered as a canvasser for the Heart and Stroke Foundation, as well as helping Sister Justine raise money for the Elizabeth House.

Jim has shared his passion for life and hockey with his wife, Glee, and their two sons, Cory and Michael. Cory is presently playing hockey in Germany and Michael works for Air Canada, residing in Calgary.

Jim attends many amateur hockey games each season. At the rink, the “Commish” is always a welcome sight. With his famous sense of humor, sincere interest in helping others, and genuine love of the game, Jim has contributed greatly, making Calgary hockey a great amateur sport. Few persons have impacted a sport so deeply and positively as Jim Holden.

The Calgary Booster Club is proud to honor Jim Holden as its 53rd Sportsperson of the Year.